This has to be one of the oldest Australian guitar amplifiers still in existence.

Its design is 'pre-war' in several respects. The use of octal-based preamp valves was on the way out with the advent of all-glass valves in the 1950's.

The conformal clam-shell valve cans or shields, and the use of valves with a top-cap grid was common in pre-war radiograms, as was the use of electro-magnetic 'electrodynamic' loudspeakers. 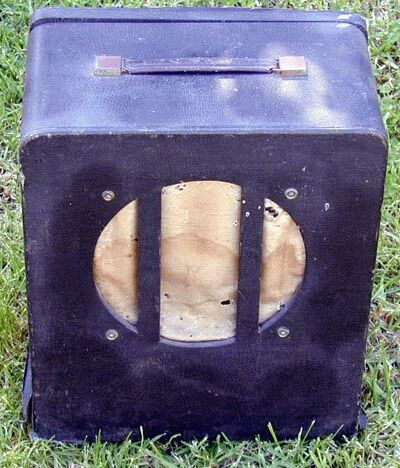 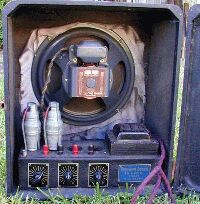 These speakers didn't have a magnet, instead using an electromagnet which was generally energised by the high tension current, thus doubling as a filter choke in the power supply. While this was cunning, it also introduced some mains hum.

With only one output valve this is a single-ended class-A output stage and thus very limited in power. 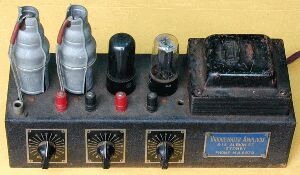 The 5Y3 rectifier was once very common, being an upgrade of the even earlier 4-pin 80 type. Note that with directly heated valve rectifiers such as this the heater is also at full HT potential.

The resistors are marked using the old 'body-end-dot' scheme where the first digit is the colour of the body, the second digit the end colour, and the multiplier the dot in the middle.

These pre-date the prefered value system and so the two resistors top left, green/black/yellow, are 500k ohms, not the 470k you might expect. These would be nominally one-watt rating.

The capacitors at left are the dreaded waxed paper and will almost certainly be leaky. Similarly the electros at centre and right would at least require re-forming and probable replacement.

The mains lead is cloth-covered 'cabtyre' or rubber insulated. Any rubber insulated cable is now so old as to be unsafe to use as the rubber insulation degrades and crumbles or turns to a tarry paste, depending on the pigment originally used.

The input socket is a PMG type at the top-left bridged by the 2M2 ohm resistor. The socket at centre-bottom is the speaker connector. Since the output transformer is mounted on the speaker which also uses an electromagnet ALL the pins are at HT voltage. 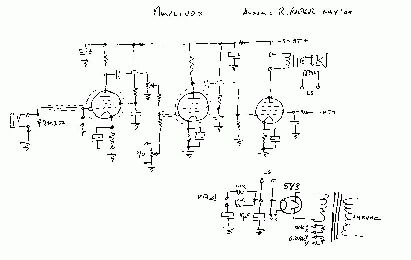 This one is assumed to be another Amplivox due to its similarity to the one above, but obviously a different model which may be bit later. 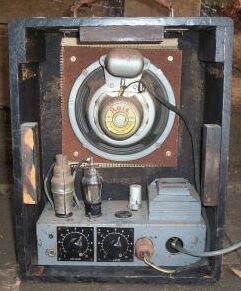 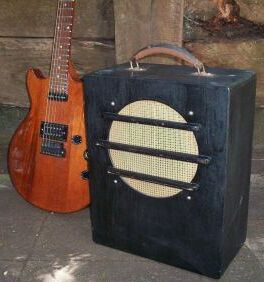 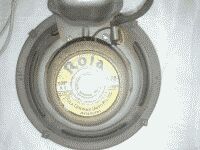 Now this one is seriously old. It has a speaker with an electromagnet, output tranny mounted on the speaker frame, and the long thin electrolytic caps. 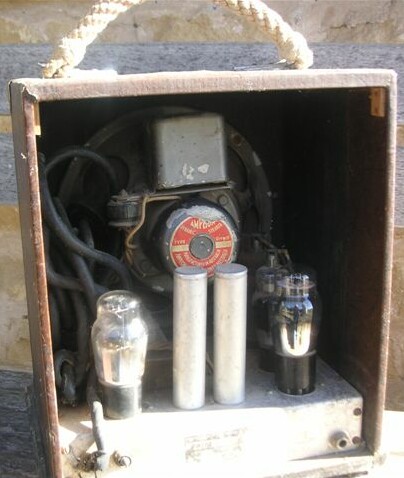 But the real givaway is the shape of the valve envelopes, which place it in the sometime in the 1940's. Reconditioning an amp of this vintage is simply not practical without altering it considerably, so it is better to keep such an amp as a non-working exhibit.