What they lack in numbers they more than make up for in reputation.

Yeah, the guy who built BAEZ amps in Newcastle was a bloke called Michael Sampson. I took my Marshall to get repaired by him and found out he was building amps at his place in his garage. He use to build them in the 70's and the guys that bought them swore by them. They only took them back once every 10 years or so for a general check up...not a repair. They never broke down. They were very much like old Marshalls/Hiwatts only better.

He started building them again and guys started asking for more gain on them...so he built another model. These things looked the dogs bollocks amazing. Then they asked for more gain so he added an extra gain dial on there.

One bloke from a 'notable' Newcastle band took in a Marshall 900 head and a JMP for service. He borrowed a BAEZ 100 watt head for the time that Mick had his amps during repair and when he came back to pick them up he sold his Marshall 900 and walked out of Micks place with a 100 watt BAEZ head and two 4 x 12 BAEZ cabs. Thats how good they were.

Me and some mates went to a gig at a Newcastle pub and the guitarist for them was using one of these amps. Everyone there was dead set amazed at how good it sounded.

I watched an outdoor concert in Newcastle where they turned up yet again. A metal band on at one stage had more Marshalls than you could poke a stick at......50 meters back from the stage they sounded thin and had lost all their balls.....no bass.

Enter the BAEZ amps that held their bass, treble...they sounded full and pretty bloody decent! I sat and watched some of the gig with Mick himself who was there to see how his amps went.

Problem is Mick stopped making them from what i understand. He was making them in his backyard and he just couldnt get the sales to keep going forward. I know he took them to Musos Corner there but as soon as someone was interested in them the sales guys there to sell more Marshalls would say “hey check out this Marshall and we'll do a lot cheaper than this BAEZ”. He couldnt compete.

I went back to get one of these amps from him and he'd basically stopped making them and from what i could gather was doing other stuff as he'd lost interest a lot. Its was a real shame to see because these amps were the equivalent of the quality and sound to compete with the best amps you can get. Better than Marshalls and Soldanos and the equivalent of Mesa's and custom made high gain amps.

Its been a while since ive seen him and whether he's making these anymore who knows. The design and layout of this model he built is similar to what a lot of the super expensive models of Mesa, Marshall, VHT are now being released with. If they had a Marshall or Mesa badge on em they'd be writing it up as one of the best amp they've ever built.
Matt

Yeah the BAEZ Amps were out of Newcastle I believe. A guy with the name Mick Samson? I think built them.

They were awsome amps. I had never heard of them before I got mine around '94 at one of those shops along Parra Rd near Annandale [Sydney]. It just so happend that the same day there was the same head in one of the other shops, but it was not in great nick. Then only a couple of weeks after I bought it, I played a gig with a band from Newcastle called The Slots, and the bass player had a BAEZ Amp head. Have never seen one since, weird huh?

PS: check out my band at www.dukewilde.com

Mick Sampson was the proprietor and I think Gary Pomfrett was his main technician.

The other guitarist in my band at the time had a Baez 50W head that was pretty much a master volume Marshall type design. There were a number of local muso's using Baez gear and I have also seen a few of them up here [Lismore, NSW], notably a 200W 4 x KT88 powered PA and a 6 x EL34 bass amp. 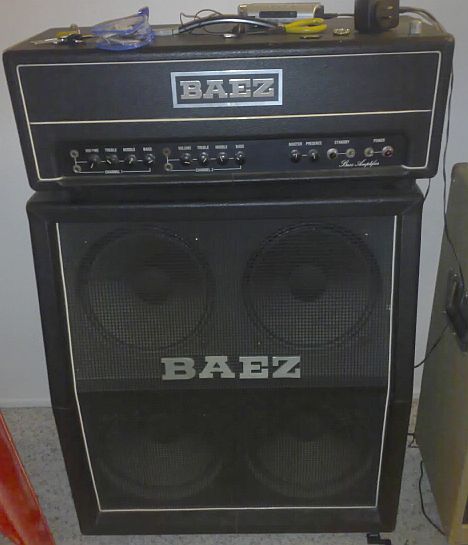