The hard-working research department here at Australian Valve Amps has been working its way through a pile of de-classified Government documents, and they have made a truly amazing discovery.

We all know that Nicola Tesla was a genius before his time, and that the Government supressed many of his inventions. Combing through mountains of released documents we have discovered what must be the biggest, and quite possibly the oldest, guitar amp in the world.

Built by the Federal-Poulsen Company it was designed by none other than Nicola Tesla himself. Since valves hadn't been invented yet, Nicola cunningly used a plama arc, and produced an output of 250 kilowatts in what was effectively a Single-Ended Class-A design. 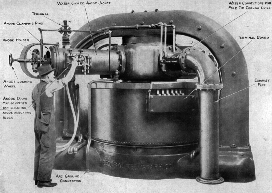 So far we have found no mention of a matching speaker cabinet, but it's possible he never had the funds to develop it. It's also possible the Government decided to suppress his invention before he got speakers for it.

Power supply details are not given.

Contributor Peter Hutchison has located one of the speakers for the above amp. 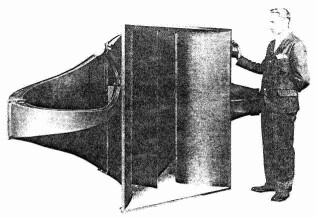 The great man himself pictured with what is now thought to be only surviving part of a large stacked array of perhaps as many as 25 identical units rated at 10kW each, no doubt stacked as a 5 x 5.

Even at a conversion efficiency of 100dB/W the resulting SPL one metre in front of the stack would have been a respectable 154dBspl.

Was this the reality of Tesla's Death Ray and resonance work?