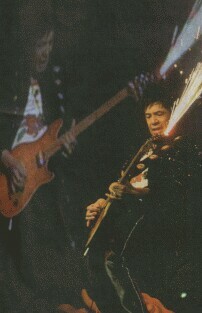 My lady and I were lucky enough to get comped to the Countdown Spectacular at the Rod Laver Arena, Melbourne, in the third and last full house of all ages. Sure there were lots of middle-age spread, but a surprisingly large number of young teens, and younger, with their parents.

If they were expecting a very full-on big arena show with flying-J line-sources and all the trimmings, they get what they expected.

Most of the feature artists have to be in their fifties, and even a role-call of film clips on the big screens by ex-Skyhook Red Symons of those, like Sherls, who didn't make it this far. So they had a bunch of young screamers and tassle-wavers, likely hired, corralled down the front. But they didn't need them.

Inside many mums a teenager sprang to life driven by the gut-thumping impact of the kick drum through the PA. And their daughters? Well it was still rock n' roll!

John Paul Young was the first to demonstrate they still had whatever it was with Yesterday's Hero, and the evening progressed between the live stage and flashbacks on the three big screens.

The Models did I Hear Motion and James Reyne carried Reckless as the house band keybordists did an excellent flying recovery from a dead feature synth.

The Disco era was remembered (thankfully) in playback snippets with a mob of highly energetic dancers, perhaps left over from the Commonwealth Games, and a wonderful re-creation of the pumpin' Flashdance video live.

As we got into the night with Solid Rock the audience started to demonstrate they had actually been listening all those years. I heard some reports of off-key singing, but around where we were they could sing and they were bloody well going to.

Joe Camillri and Wilbur Wilde did great dueling saxes; while the grimace of Joe Shutupayourface was soon over. I'm just thankful that Fats Moisty had a prior engagement.

Renee Geyer's perpetual cover of It's a Man's World was the only number all night to significantly vary the familiar reading, while everybody else stayed one-hundred percent recognisable. In an ironic twist Idle Aussie Judge Mark Holden selected himself out of the show before opening night over “musical differences”. One Prima Donna per show is the normal quota, and very few get to wag the dog.

Hush led into the interval and, despite fire-breathing dragons (that farted fire at rehersal by mistake and almost incinerated their drummer) and pyrotechnics, they didn't set me on fire.

There was a bunch of Hum-Drum codswallop featuring Molly Meldrum demonstrating yet again that he couldn't pick a hit or interview a drumstick if his life depended on it, even with Prince Charles helping. Yes Molly, we know you're gay, but the jokes were better left buried in the era. I can't help wondering if Norman Gunston trained with Molly.

Jon English failed to really rise above his initial guitar not-plugged-in problems, The Cheaters and Shantoozies covered the girly thing with verve but didn't move me.

Most of the artists were backed by an excellent house band comprising musical director Peter Luscome, Bruce Haymes, Bill McDonald, and the unlucky but fleet-footed Ashley Taylor on keys. This crew must have been kids at the time, yet they were note perfect, tight as, and faithful to the originals over a wide range of material. The three-girl chorus were even younger but provided great support all night.

The evening closed with more Sherbet than you could reasonably want, but not before Mondo Rock stole the show with a smokin' Come, Said the Boy, Eric McCusker being the only guitarist game to get out on the catwalk for guitarists everywhere.

Maton guitars got a well deserved mention, but sadly there wasn't an Aussie amp to be seen.

And of course all the unsung extras, the sound crew, the lighting crew, the recording crew, the TV system crew, riggers, roadies, instrument techs and venue staff, publicity and organisation skills that stand behind a show of this magnitude. The show is a fund-raiser for Support Act and currently touring New Zealand. The DVD is certain to become a collectors item.