The Dean of Gonzo journalism.

“When the going gets weird, the weird turn pro ” - HST

Hunter S. was a very odd character. Loved guns and explosives, riding fast motobikes while getting very non-linear on hard liquor. Inviting his buddies to join him shooting on his ranch where they would blow up old cars and trucks using Army surplus weapons. It's a small wonder he actually lived long enough to commit suicide earlier this year.

His writing style was similarly non-linear, seemingly drug-addled and often confusing, but engaging and his final message and imagry were clear and his writing extensive. His best known work is Fear and Loathing in Las Vegas.

He was also a stinging critic, as this quote shows, not least of Government at all levels and US foreign miltary interventions.

He founded a school of journalism, so-called Gonzo, of which he was probably the only member. This is where the journalist reports on what is happening by their reaction to it, a totally personal view.

He wanted his remains blasted out of a cannon, and after a bit of official hurumphing, he got his wish. Boom! Very showbiz Hunter. 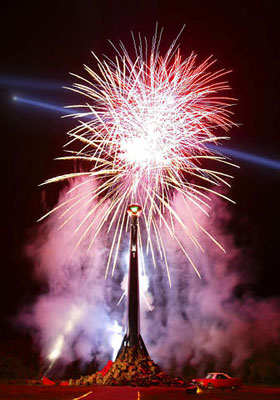 “I hate to advocate drugs, alcohol, violence or insanity to anyone, but they've always worked for me ” - HST