Beverley Bruce and Goldie was dissolved around 1978 when it became Brent Distributors and later Jansen Sound Ltd.

Thanks to John Veldwijk of Jansen for kindly providing these circuits. 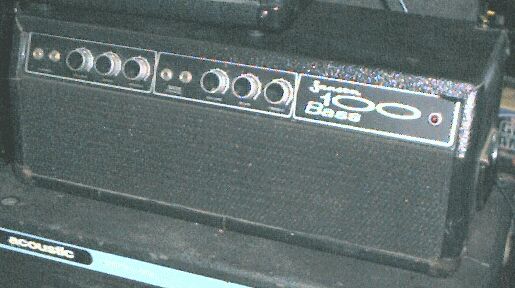 The Bassman series had an extra tube after the phase splitter to increase drive voltage to the grids of the output tubes. Fender circuits do not have this stage and barely make enough drive peak to peak volts to get full saturation. This stage also increases the gain by a large factor.

In the fifties, valve amplifiers were the only form of amplification available. A bass rig of one hundred watts, fed through a set of four Rola or Philips twelve-inch speakers, was the envy of any musician who played in the venues of the day. In the days before the introduction of affordable portable PAs, many bands used Jansen's classic Bassman 50 amp as their entire sound system, with the microphones plugged into channel one and instruments into channel two.
www.milesago.com

The power amp driver is almost hi-fi with a pair of ECC82 (12AU7) valves in a slightly more complex three stage circuit than your average Fender or Marshall. Each of the two input channels use the usual single ECC83 (12AX7) valve. The tone control circuits are rather weird with a special 350K ohm tapped potentiometer for the treble control. However, all of the tone components are hand wired point-to-point off the main board and can be easily modified.

Serviceability is generally easy. Something I like about Jansens is they copied the Fender Bassman chassis layout. So, the amp heads are easily converted into combo amps by making a vertically stretched cabinet that holds speakers as well as the amp. Two 10” or single 15” speakers fit nicely.

The Bassman 50 that I serviced was well maintained. The chassis was sturdy and component quality generally good. The transformers were larger than 50 watt Fender Bassmans.

I replaced the output tubes with Sovtek 5881s. Cheaper Sovtek 6L6GCs could not handle the plate voltage although they would be a good choice for the Bassman 35. I also repaired some wiring faults and modified the power amp feedback circuit per Jansen's instructions. All preamp/driver tubes were fairly new and tested.

Listening tests revealed a grainy, dull tone which showed up as poor treble response in bench tests. Jansen used a variety of transformer manufacturers, so all Bassman 50s may not sound this way. Bass response was good.