Apparently from the 1950's, Peter was an early post-War amp builder.

Barry Marie has been working on his Maxim and even has a circuit coming.
In the meantime he has a couple of comments ...

There are no screen resistors on the power tubes. The 6V6 plate and screen are tied together and the cathode is tied to the screens on the KT88 tubes.

The one thing I'd say to anyone that owns one of these wonderful amps, is to change the 10w 220ohm cathode resistor to a 25w. There simply has to be a lot of current being pulled through that cathode resistor. I worries me that 10w really isn't enough.

The first comment confirms the conjecture that the 6V6 functions as a voltage regulator for the output valve screens. While uncommon in guitar amps, this sort of regulator is quite conventional and works in much the same way as a solid-state regulator with a series pass transistor, the 6V6 here being the series pass element. -rr

I had a pic on this page for a while of a Maxim head with “sold” written across it.

Well Steve Herenyi wrote to me telling me he was the lucky fella who bought it, and included some nicer shots of the same head. The underchassis in particular is worth a closer look.

The valves are as follows:

The lo-hi controls on the front shear off treble the lower the number, the higher the number increases treble.

Channel 2 is more “bassy” than channel 1.

I have no idea what the other 2 jacks are beside the speaker ones.

The tube on the end is definately a 6V6GTA by Genral Electric.

My little green light on the front doesn't work, I've had a multi-meter across it & it shows absolutely nothing, also the amp generates a bit of white noise, not too annoying though. Otherwise awesome amp!

I use this as a guitar head, but it looks like it could have been an old P.A?

One little oddity about this amp; the front panel flows from right to left rather than the more normal left to right. Makes me wonder if Peter McCarthy was left-handed.

The 6V6 strikes me as a bit curious; I'd expect a rectifier, but time will tell.

From their position on the chassis the two 6SJ7's look like they are some sort of pentode-based phase inverter and driver for the KT88's. KT88's often have specific driver stages, but this arrangement is unique in my experience.

Should be good for around 100 watts.

The hum-dinger trim can be seen lower right behind the master volume (grey/grey, white/blue). Upper right is the main bi-phase rectifier with three diodes series in each leg for increased PIV rating, each shunted by a small anti-spike protection cap across each one.

The first two pairs of electrolytic capacitors, right centre, appear to be connected in series for higher voltage rating. The resistors between are to balance the voltage across each cap, and to act as safety bleeders.

Steve Herenyi wrote to say that the following Maxim is in the custody of a young fella in Bundoora, Melbourne. Doing some work on the pots by the look of it.

Simpler than the amp above, this could nominally be a bass amp.

This is what real 100 watt transformer stacks look like. 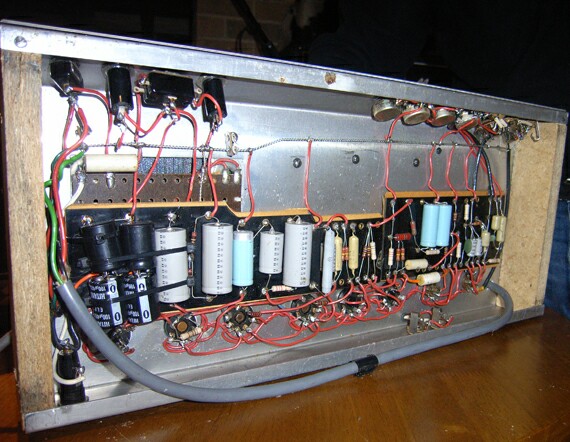 Valve line up, L-R, two 12AX7's in the preamp, two 6SK7 pentodes as drivers, two KT88's, a single 6V6 pentode as a screen voltage regulator, and a missing rectifer (may have been GZ-series replaced by silicon diodes).

See what Rick Veneer has to say about his Maxim.

This little charmer is a real “combo”, amp and carry case for the slide guitar. 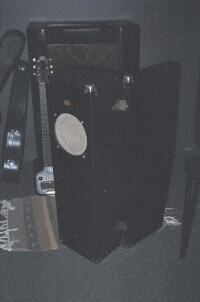 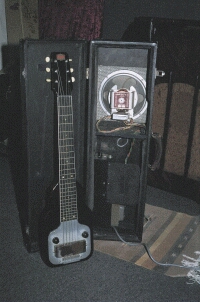 The slide guitar fits inside the amp as a neat little gigging package.

Note the loudspeaker is a wound-magnet type, sometimes called electro-dynamic, where the required magnetic field is generated by passing the HT current through the winding just visable on the top (yellow).

This doubled as a HT choke filter, but would contribute some hum directly in the loudpeaker.

The output transformer is mounted on the bottom of the loudspeaker, so all of the speaker connections are at or near HT. This was common practice in the 1940's and early 50's.