Variable resistances are vital in electronics to allow a direct human interaction with the equipment.

Variable resistances are aften called pots, so it's worthwhile taking a moment to trace how this name was derived.

“Pot” is short for potentiometer, an early term for a resistive voltage divider used to derive required voltages from fixed voltage batteries.

The name Potentiometer is still used in that sense for precision DC supplies used an instrument calbrators, particularly to simulate the output of thermocouples for testing temperature controllers.

In guitar amps we use pots to proportion the overall loudness, set high and low pass filter frequencies, control tremolo oscillator speed and modulation depth, set the bias point, and anywhere else we need to change resistor values through user input. 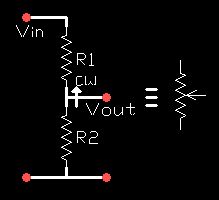 In other words the output voltage Vout is equal to a proportion of the input voltage Vin, that proportion being the R2'th part of the whole resistance, R1 + R2.

This has direct application to working out the resistance values for feedback networks around op-amps. If the NFB divider is 100:1 then the gain will actually be x101, so if a gain of exactly 100 is required, say in a calibrated instrument, then the resistors have to be 1 and 99, a rather awkward value.

But if we have a resistive element that we can make a sliding contact to, then we have a variable resistance than can be set to any desired value in its range.

In practice this basic description covers a wide range of variants. The element tracks may be conductive plastic, carbon, or wound resistance wire. They may be rotary or linear, ranging from tiny to huge. They may be 270 degree rotation, or multi-turn of 10 turn, 20 turn, or even continuous rotation.

These days the commonly available audio pots are a pale shadow of the variants that were once common.

Possibly the most common variant was the switch-pot, a pot with a mains-rated switch on the back that operated off zero as a combined volume and power control. These still show up in guitar amps.

Another form of switch pot used on guitar amps was the pull-on switch type where the pot position and switching action are independant.

Another common variant is the stereo pot with two identical pots on a single shaft. The quadrophonic era also spawned some quad stack pots but these are now rare.

Car radios in particular make use of co-axial pots, often combined with rotary or push-pull switching, where two independant controls are operated by inner and outer sleve shafts (which require a particular type of matching knob set). These may also have detents, tactile clues to the mid position.

You sometimes encounter volume pots in equipment with pretentions that are fitted with stepped detents over the whole rotation. This is an attempt to make a normal continuous track pot feel like a high quality studio stepped attenuator.

Sometimes these may have a reduced range of motion at 90 degrees, and it is not uncommon to find a fixed tapping connection on the volume control.

When you encounter a tapped pot it will most likely be on a volume control, and it's a fair bet that it is an in-built “loudness” control. (see below)

Note: the letter codes used to indicate pot tapers have changed since most classic Australian Valve amps were built; “A” was linear, “C” was audio log.

The simplest pot has a linear taper, that is the resistance proportion is a simple direct function of pot rotation.

Most pots have a rotation of a bit over three-quarters of a turn, a bit more than 270 degrees. For simplicity this is generally scaled 0 to 10, zero being off and 10 being full rotation.

There is a standing joke about Marshall amps using a scale up to eleven, but any attempt to rotate a pot to eleven will result in a broken pot and no signal.

This might be the end of the story were it not for the fact that the human ear does not have a linear response to loudness, nor indeed is that response constant with different audio frequencies.

The problem is that human hearing has an inherent Automatic Level Control or ALC. It's because we all have an audio compressor built in to our ears. Another problem is that as a compressor, the response curve is optimised for the intelligebility of human speech, something we experience with the Cocktail Party Effect where you can still understand what is being said despite strong masking noise.

The first problem is basically that sound perception is a “square law”, as sound gets louder the level has to go up four times to sound twice as loud, hence the logarithmic Decibel scale.

This is addressed fairly simply by making pots that have roughly the opposite action, so-called log or audio taper.

The common log pot actually consists of two or three linear tapers which approximate a log curve (and this is good enough to fool the hand-ear co-ordination).

Passive tonestacks generally require log pots ('tho there are exceptions). Baxandall feedback tone controls require linear pots, but while very common in stereos the Baxandall is rare in guitar amps.

Normally pots are used in the forward audio path where direct proportioning is required, but sometimes it is desired to use a control in the feedback path, say a cathode gain control, where a reverse or anti taper is required for the same end effect. Anti-log pots are rare.

Apart from the tapers above all sorts of special tapers have been made such as double-log or log-log, and double anti-log, but these are very rare indeed.

To a limited extent it is possible to pull the taper of a pot so that combinations of standard pots with some other components can produce a range of curves for position against response. 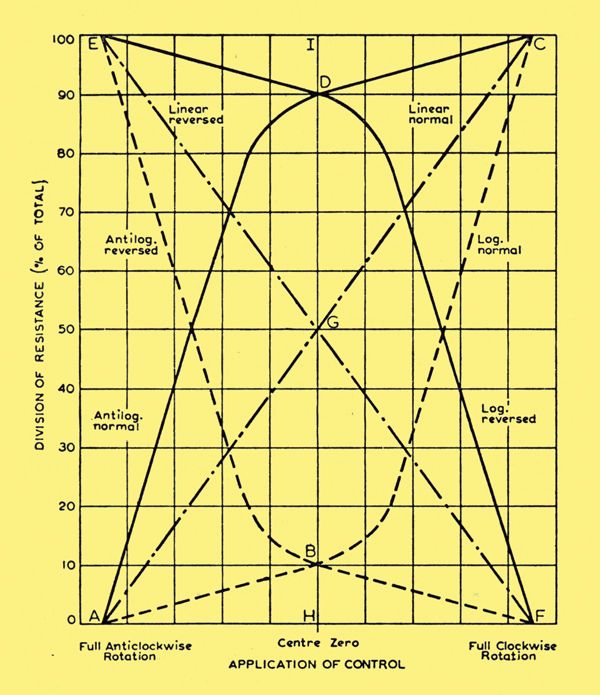 This article from Electronics World+Wireless World, Aug 1993, has a page of text and a page of diagrames showing how pots can be customised to particular needs.

The second major problem with human hearing comes under the general heading of “loudness”, mainly because that is the name given to the control on many stereos.

Human hearing is anything but flat and is confused by the fact that the shape of the response depends on the absolute level of the sound.

This leads us to the classic Fletcher-Munson Equal Loudness Countour.

These curves are very valuable, but we must remember that they are the average of 40,000 American subjects tested about seventy years ago. Specific individuals may deviate considerably from these curves.

In simple terms, at low listening levels the bass has to be boosted with respect to the midband so that it still sounds in the correct proportion. If you turn loud music down, the bass seems to be turned down more than the midband.

The function of the Loudness switch or knob is to provide some bass boost for low listening levels, putting the bass back in proportion.

Paradoxically Loudness controls tend to be found on more up-market stereos, yet a better method of doing this was employed on many valve era mantle radios and radiograms by using a volume control pot with a tapping around 30%, and arranged with a capacitor to give the lower control span a bass lift.

One undesirable property of a pot is that it forms a low pass filter with any stray capacitance in the following circuit, and this can lead to a loss of top end for mid range volume settings.

A simple fix is to compensate for the stray capacitance with a small top-coupling cap from the hot end of the volume pot to its wiper. This produces a modest degree of treble boost that rises as the pot is turned down (in a similar manner to the Loudness control above, but acting on the high end) so that the high frequencies remain in balance with the midrange.

This will typically be quite a small value from 47pF to perhaps 470pF to taste, poly prefered over ceramic. You can calculate a value but it is far more direct to fit a small cap such as 100pF and work up or down from there guided by your listening tests.