The story goes that the 807 was the type that inspired the nickname 'bottle' for valves because they were so large.

Certainly they were the first choice for any sort of power application, radio or audio, for many years.

Rows of 807's were the mainstay of transmitters and modulators during and after WW2 and were common in PA amplifiers. A number of homebrewer used these in guitar amps but by the mid 1970's they were being used as targets in a shooting gallery at the Geelong (Melbourne) Hamfest.

The three circuits shown below appear to be from Ferguson Transformers as it was not uncommon for transformer manufacturers to supply designs that used their components.

These designs differ from later practice by using a driver transformer rather than a phase-splitter stage. Naturally two transformers in the signal path produced limited bandwidth, extra weight, and expense.

One important point not shown in these circuits was the need for 'stopper' resistors hard on each anode (47 ohm) and control grid (1k) terminal to prevent radio frequency oscillation which these were particularly prone to.

Here is a photograph of a circuit for a 50 watt modulator for Ham radio service. (sorry it's a bit fuzzy).
Source: Joe (amp_mangler)

Some notable features set this apart from a guitar amp:

The power supply shown serves the CRT (lower left). This will be quite a small tube like a 913 or 1CP1 with a 1-inch screen. Note that the CRT heater/cathode is at full HT voltage. The minimal input circuit to the Y plates on the CRT are high-level RF coming from the transmitter, and requires no amplification.

The output transformer, or modulation transformer as is is called in this case, differs mainly in that the secondary winding is much higher impedance than the eight ohms typical of a guitar amp, several k-ohms, and therefore useless for much else.

I don't know how he lifts this, but here's an example of where you can go with 807's. Not Australian and totally over the top, but worth studying as a good set of examples in valve design. 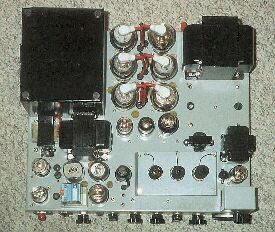 For a nice local 807 build, take a look at Marty Stone's “lounge toy”.