Circuit of power amp. Errata: the resistors in the power stage that are marked 1k5 are 15k.

It is a really quiet amp on idle, nothing like the GB100 I have but it isn't as touchy to set up either. Be wary of the voltages listed these are what I am seeing not what might be correct in the original design. It is a mix of designs but the preamp and splitter are very much from the Marshall JCM Lead school.

The major fault with the amp was the 0.047 coupling cap in the bias [supply] circuit which had bad temperature drift, unfortunately I didn't have a high enough voltage replacement so had to make up a series combination to cover the HV that the Lenard is using, although it isn't as high as the GB100 thankfully! It also seems to run the finals at fairly low quiescent [suggetsing Class-B], it was only dissipating around 5 watts each valve when it arrived, however it still had the original valves it left the factory with as far as I am aware!!

It is owned by a local rock bass player and has been extensively gigged. 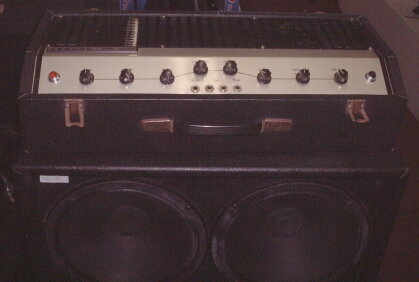 This series had a unique physical layout with the valves horizontal under the perf-metal top, providing good ventillation for the four overworked 6CA7's, and a clip-on transport cover for protection. But not a good place to stand a drink, or anything else for that matter. 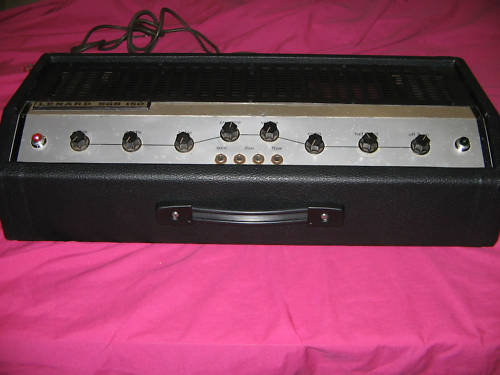 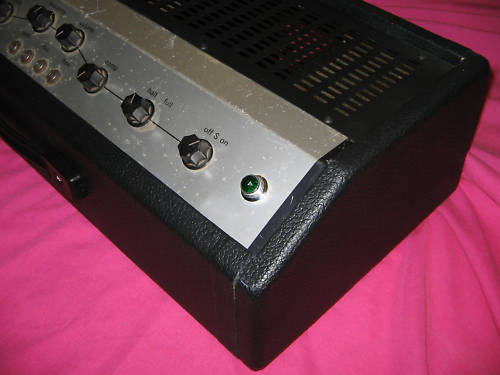 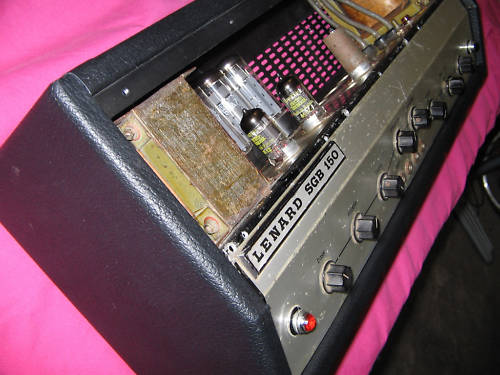 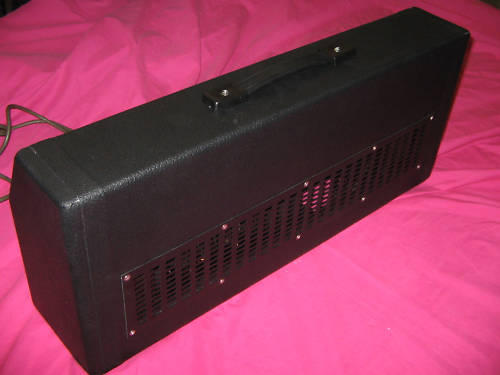 It's a shame that the good engineering idea to get some cooling is undone by common gig practice of placing drinks on amps. You shouldn't, but it does happen, and sooner or later one ends up inside if there is any kind of opening on the top. That is simply a fact of life. After one gig I found half a plate under a combo reverb line, so “stuff happens” at gigs.

A shame, because otherwise I've found these amps quite appealing in their general lo-line look, similarly some of the Electovox's.

Comes with 2x speaker jack leads attached for plugging into speaker cabs, and also a speaker out socket

2x jewel indicator lamps......red one for power, green one for standby.

This unit works fine but would benefit from a bit of cosmetic tlc , i've had it for years with plans to restore it to its former glory. 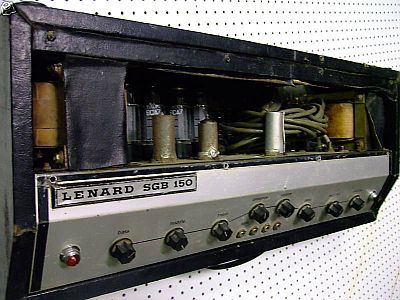 I bought this amp about 5 years ago from a guy who used to scavenge at dumps. I went there to buy something else he had advertised in the paper, and went below his house to where he had a stockpile of speakers, electrical equipment etc. I saw the head unit, and bought it off him. When I was leaving he asked if I would also be interested in the speaker which I got. He also gave me another E tone speaker, which made me think he had another cabinet, but he said he didn't. 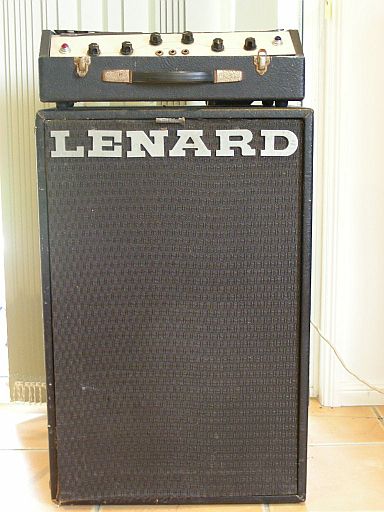 I have used it solidly for 5 years at home without problem, although recently it doesn't sound as good. Maybe the valves need replacing? Quite likely. -rr It has EL34 valves by Phillips. Serial number is 61040. 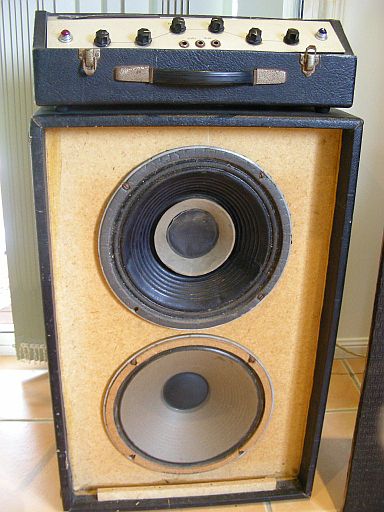 All controls work except the compressor doesn't do anything. Given the vintage this may well be a simple globe and LDR, and the globe may be burned out. -rr 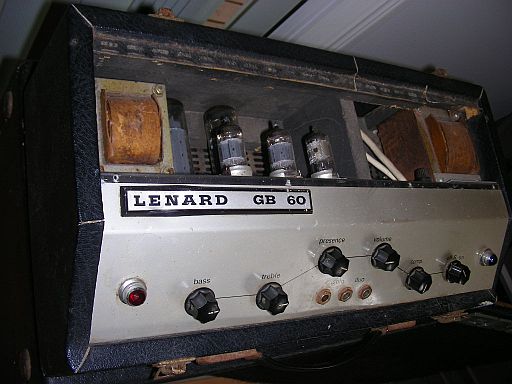 The body was in good shape until one night someone tripped over a lead, and sent it crashing to the ground. The amp still worked but has a dent across the Lenard name. 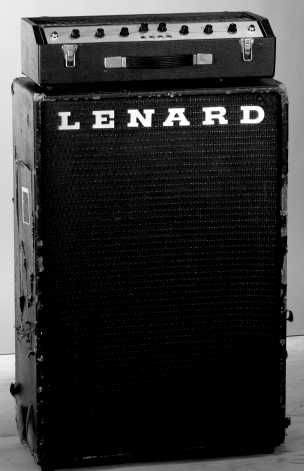 I only had one encounter with Lenard gear, a PA with 4 horizontally mounted 6CA7's and a power variation switch and, with all due respect, it wasn't released - it escaped. It was a disaster going somewhere to happen. The ultimate tech's nightmare of a 'design' so far off the wall, so far out of spec, it could destroy whole sets of output valves on demand.

The 900 volt HT supply was so excessive on 'full' power that the valve bases and sockets were flashing over from anode to cathode. Not one to be proud of. On the full power position each anode was dissipating over 30 watts while the absolute maximum rating is 25 watts, which explains why the anodes were glowing red at idle.

The other point is a bit obscure. The two ends of the output transformer act like a voltage see-saw. When one end is pulled down to ground by the valve(s) on one side, the voltage on the other side plate goes up by the same amount.

At full drive the peak plate voltage is twice the supply voltage, or 1800 volts in this case. This explains why the valve bases themselves were flashing over and arcing from anode to the grounded heater pin adjacent, even after I fitted ceramic sockets to stop the phenolic ones flashing over.

It's not the first time I have wondered how some woggly piece of gear had managed to get as far as my workshop.

Rod Elliot of ESP wrote to me (17/7/04) after reading my comments above. This was one amplifier a long time ago and in fairness to John Burnett I reproduce Rod's remarks below. I have visited John's web site and recommend his education section to anyone interested in learning about sound and how it behaves.

John Burnett (Lenard) is still going strong. We worked together for quite a while not long after Lenard folded (and are still collaborating on one of his new projects and some other stuff), and his site is at http://lenardaudio.com
The review on the 'escaped' power amp is not representative of the majority of John's valve designs though. I have an ancient Lenard PA amp here (not sure why) and one of the later Brik amps - they were as solid as a rock. Most of the gear that he made was actually pretty good. I do recall that with some amps (not sure if they were Lenard though), a standard 'fix' was a short piece of plastic tubing over the anode pin, and some silicone grease to provide a barrier against arcs.

Silicon Note:
Silicon grease does have very good insulating properties but it also has very high surface tension, typically around 2000, which causes silicon to wick, creep, and migrate from where it is applied, even with compounds that set (e.g. 'Silastic'). Higher temperatures such as found in valve equipment will speed up migration.

Silicon compounds were banned in telephone exchanges after it was found that silicon was migrating up to 3 metres along wiring and onto relay contacts. The high temperatures of tiny arcs at the contacts caused the formation of hard, insulating, crystals of silicon dioxide on the contact faces causing contact failure.

Small signal contacts, such as the nearby grid one pin, may be adversely effected. Removal of silicon compounds is particularly difficult because of their resistance to wetting.

Lenard amps sounded very good with guitars (Les Pauls) but were very unreliable, I suspect due to the “compact” design...and maybe for the design reasons you discovered in the PA?....

FREE used them on stage at the Randwick Sydney concert...and blew them during Kossof's critical moments.

I have a tape with Andy Fraser improvising away whilst the dead amp was removed......

Lenard were THE amp to have in Sydney for several years, circa 1968 to 1973 and most of the major Sydney bands of that era used them for both bass and guitar, as well as often for PA. AFAIK, they are were as pervasive in Sydney in their day as Strauss amps were in Melbourne.

As for the number made, I don't have any real idea, but there were several hundred of the Sxx 150/200 series models turned out while I was working there, plus a bunch of Sxx 60/100 models as well. I suspect that overall production numbers would be several thousand.

The cabinets were made out of pyneboard and did not age well, the casters wore through the bottoms of the larger cabinets after a few years and it relatively rare to see an intact Lenard cabinet now a days. The electronics design was pretty straight forward, with an ultra-linear output stage with selectable speaker impedance taps. It was meant for easy maintenance, so as long as the custom wound Furgeson transformers are OK, they can be kept going just about forever. Many of the heads are still about and I still see some being used by bassists, at least around Sydney.

The biggest production system we ever made while I was there was for John Robbinson's bassist (I forget his name) who had two 4 x 15” cabinets driven from two SGB-200 heads. We also did all the sound for the Ourimbah Pop festival (a Woodstock style event on a farm North of Sydney) in 1970 and produced some enormous custom made rigs for that.

By the way, the name came from the middle name of the owner of the company John Lenard Burnett.

Strauss amps were certainly “pervasive” on my Melbourne workbench at the time, and it wasn't because they were reliable. ;) “If it's shouse it's Strauss” as detractors would put it at the time; much favored by 'CreamandHendrix' cover bands.