They manufactured guitar and bass amps, and PA amps and boxes from late 1962.

Over time the company had swings of fortune which could be partly put down to a rapid turnover in assembly technicians caused by the low turnover in guitar amps, so they failed to build the skills base that forms a good company reputation for consistancy.

In 1969, the company name was changed to Nova Sound.

Grant Wills has come up with a circuit tracing for a Polka 150.

Hi Roly, Tony Naylor here, my son sent you some limited info on the Strauss Warrior. I had the good fortune to buy Lobby Loyde's original 6 x KT-88 Warrior from Phil Manning around 1972. I used it in the band Ida May Mack.

It had a green canvas covering and was the loudest amp I've ever played through. Speaker re-coners loved me. After Ida Mack Mack I joined a band with Phil called Band of Talabene and we went back to using smaller amps.

Lobby pursued me relentlessly to buy the amp back as by that stage we were using it as a power amp for our foldback! So I sold it back to him around about 1973. At Lobby's benefit last Tuesday night I spoke to him about it, he tells me it currently resides with his son in Brisbane.

Regarding the [Vox] AC30 tone circuits, legend has it that Lobby liked the power of the Strauss but wasn't happy with the tone, an American guy who turned up at a gig one night asked him what sound he liked, Lobby said he liked the sound of his AC30 but wanted more power. The American apparently modified the Warrior tone circuits. I have no idea whether this is true or not, this is what I heard from Lobby and Phil at the time.

As far as I know there were at least two other KT-88 models, one belonging to Billy Thorpe and the other belonging to Rob McKenzie (McKenzie Theory) Norm Sweeney, original roadie for the Aztecs, told me recently that he used to take Lobby's and Billy's Warrior's to Strauss every Monday morning because they ran the amps so hard over the weekend's gigs, the KT-88's regularly shorted out over the valve bases [*], and of course for speaker re-cones.

Hope this info is of some use, unfortunately at this stage I can't find any photo's of them, but if I do I'll send them to you.

* pin-to-pin flashover at the base/socket

This is one of the later units from the Nova Sound era.

Strauss Lancer 2 X 12 combo. No further info but looks exactly the same as the Strauss Mouse and has same A+R 2628 output transformer. Speakers are MSP C12PQ, the later ceramic magnet version of the 12PQ. 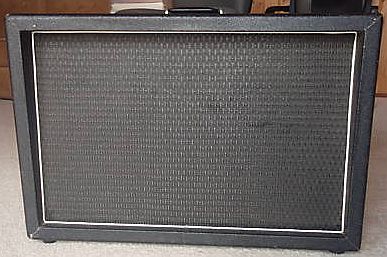 Another Lancer from Allan Roper in NZ.

I wrote back “anybody who needs a circuit has no business under the chassis”.

Anybody who can assist Allan can contact him directly {allanDOTroperATxtraDOTcoDOTnz}.

Simply plugging 7027A's into sockets wired for EL34/6CA7's will result in at least burned-out screen resistors and a very quiet amp because the pinout is significantly different.

The EL34 socket will be wired with the cathode and G3 grounded, pins 1 and 8. The 1k5 grid stopper resistor is often wired between G1 and the No Connection pins 5 and 6. Screen volts are connected to G2 pin 4.

When we plug in a 7027A the stopper resistor is bridged by the internal link - not really a problem.

But the internal link from 4 to 1 will ground the screen supply. It's uncertain which will give out first, the screen supply resistors, the power supply, or in the unhappy case it's ultra-linear connected, the output transformer. :(

Sometimes we are forced to mod an output stage due to valve type unavailability. Converting 6DQ6 amps to use EL34's is one example.

But this apparent attempt to get more watts out needs more thought than just the base wiring. Apart from the plate-to-plate load impedance, the output tranformer power handling is bound to be exceeded and the power supply strained by any extra demand.

Just because it fits in the socket doesn't mean it's right.

The power given should be treated with caution and may be input power rather than output power - TP ad's aren't all that reliable.

The left-most knob is not original 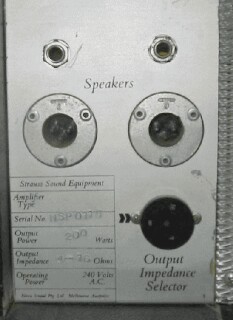 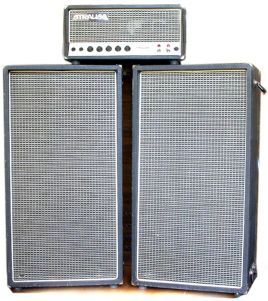 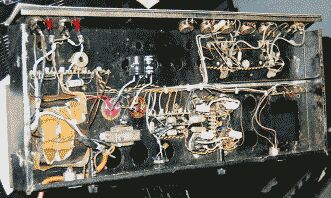 I encountered this one around 1969-70 as a package deal with another 2 x KT88 unit that was sold into PA service with Van Gogh's Left Ear, but any notes on the second amp are long gone.

This early oddity had a gas voltage regulator tube, and a very minimalist circuit approach using some direct-coupled stages.

It also had a couple of extraordinary design errors.

It is perhaps easy to overlook the surge current flowing through the voltage regulator tube into the following 50uF filter capacitor at switch-on, but it still kills the tube pretty quickly.

A much more puzzling error was the deliberate wiring of the negative feedback to the cathode of the preamp stage, ahead of the tone controls. 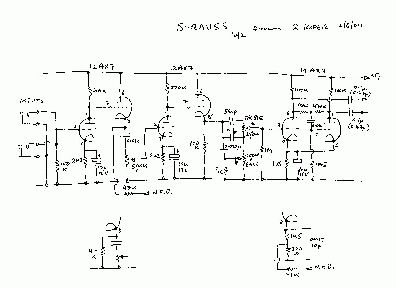 Errata: there should be a 100k resistor in the tone stack between the input/560pF and the join of the 0.1uF and 0.022uF caps, not a direct connection as shown (or this chassis had yet another wiring error in it).

Two inputs direct to the grid of a 12AX7 cascade direct-coupled, to volume. (*) Calculated with: Tone Control Simulator v1.03
This tone stack is similar to the Vox AC30. 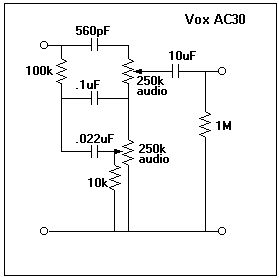 Another 12AX7 is a cathode-coupled phase inverter.

(*) In this unit the NFB was incorrectly wired to a pre-tone stage, making the amplifier unstable.

Power supply is a solid state full-wave bridge. It uses a gas voltage regulator tube VR150 to drop the HT for preamp and screens.

Note: the capacitor following this tube must be rewired to the screen side of the 1k/10W resistor to preserve the VR tube from unrush damage. A suitable zener or zener string can functonally substitute.

A number of 'kits' of parts for these heads were floating about at one stage, no doubt part of the liquidations Strauss suffered with changing fortunes, so some early built forms may be 'curious'.

And a curious story.

They argued, and he walked out, leaving her with a kit for a Strauss 60 watt 6CA7 head.

How these few 'kits' of parts, crude photocopy circuit and assembly instructions, came into being I don't know, but the lady decided that it was worth more assembled than as a kit. Being broke and with time on her hands she set to construction. She didn't have a soldering iron, couldn't afford one, and didn't know how to solder anyway, so she improvised.

It eventually arrived on my bench, and on turning it over I found that it was carefully wired per the instructions, every joint well made. With rubber cement.

After a few wiring checks and corrections I fired up the ol' Scope electric blowlamp and simply soldered through the rubber cement.

Stinks like hell and the neighbours complain,
but I don't give a hoot what they say
(Tom Waits).

She got pretty close for someone who didn't have the first idea about what she was doing and the chassis went on to Great Things. So newbies take heart. :-)

While this unit had ample valves, it was a bit short in the transformer department. Four input channels each using half a 12AX7 as a preamp.

Summed to half a 12AU7 and volume, they are then sent via treble and bass level controls to two active resonant amplifiers around 12AU7 sections.

Passive combined to a 12AU7 section as a phase inverter. 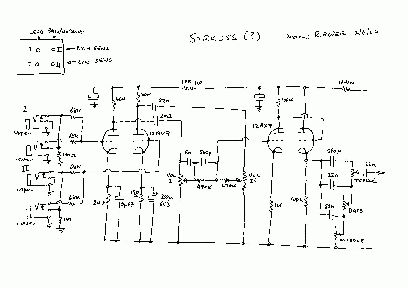 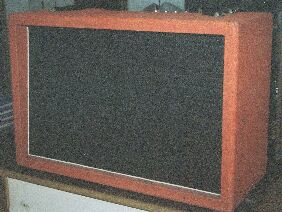 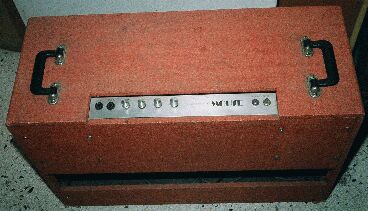 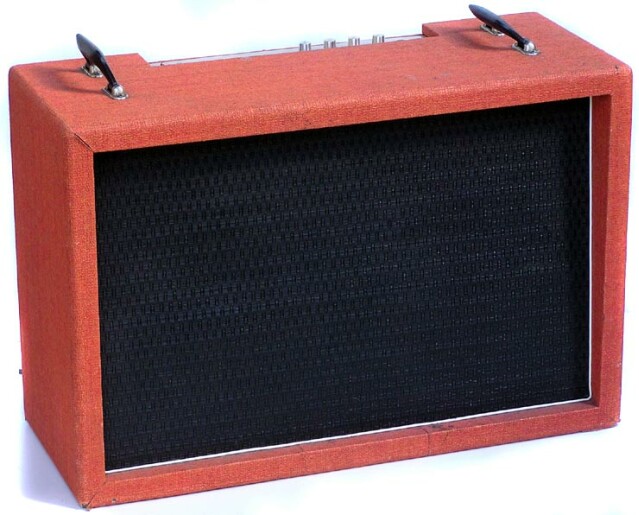 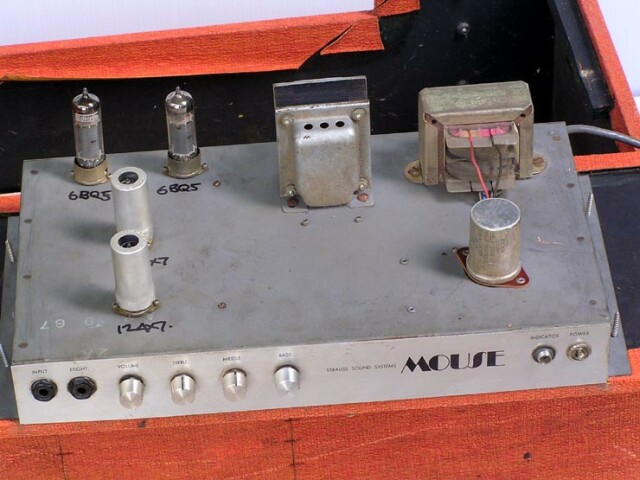 “The later sessions at Festival featured Bon and Johnny Bisset, their keyboard player, and I borrowed Mick Jurds' Strauss Guitar Amp for some songs.”
http://www.milesago.com/artists/blackfeather.htm

“My Stratocaster opens the track. It was plugged through a Roto-Vibe pedal, the late Mick Jurds' of Fraternity, and then into his Strauss Polka Amp. Bit thin by today's standards, but very atmospheric. ”
http://www.crabsodyinblue.com/acdcblackfeatherjr.htm