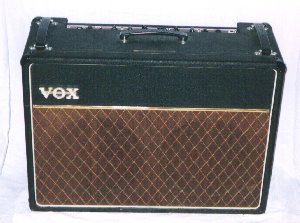 The Top Boost, or 'Brilliance Unit', was initially supplied as a user-installed retrofit, and fitted to the AC30 as standard from 1964.

In the classic downward spiral Vox became part of the Royston group in June 1964 to raise funds for expansion, but by 1967 Tom Jennings resigned in frustration from Royston's board of directors.

Tom Jennings died after a stroke in 1978.

There seems to be a confusion in guitarist circles between Class-A operation and cathode bias. This assumes that if a push-pull output stage uses cathode bias then it is therefore operating in Class-A.

The Vox AC30 is an undoubted classic, but Tom Jennings would be the first to agree that a push-pull output stage by definition must be Class-AB1 or higher. 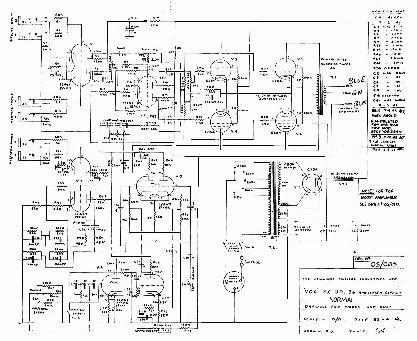 In a true class-A stage such as a preamp the cathode or bias voltage, that is the voltage measured across the by-passed cathode resistor, is quite stable and does not depend on the level of the signal.

Within its bandpass, under drive the average cathode current is equal to the quiescent or resting current, also called the Q-point. The cathode by-pass capacitor does the averaging for us and the current ratio between no drive and full drive is 1-to-1, no change.

Now if we look at the original Jennings “works only” circuit drawn by Richard Denney (above) we see the annotation on the output stage cathode line “quiescent 10V, 12.5V @ 30W”.

Gee, the cathode current changes. The bias voltage shifts upward significantly at full drive. The Vox idles at 100mA/pair rising to 125mA at full drive, a factor of 1.25.

If we now look at the generic data for a pair 6BQ5's in class AB1 we see the plate current rises from 72mA to 92mA at full drive, a factor of 1.28, almost the same.

The stage certainly seems to be slightly under-biased for class-AB1 operation and they had a well deserved reputation for being very hard on output valves. But it equally certainly isn't class-A in any meaningful use of the term - the cathode current is changing by 20 to 30 percent from idle to full drive.

The type of bias, cathode resistor or fixed supply, does not determine the class of operation.

Both class-A and class-AB stages can use either cathode bias or fixed bias without it changing their class. There is no technical reason why an input class-A stage could not be biassed with fixed bias rather than the normal (and cheap) cathode bias, and it would still be class-A. The same is true for a class-AB output stage.

If cathode bias signifies anything then it's a lower-power amplifier and the typical guitar amp transition from cathode to fixed bias was the 40W to 60W step. Many 40's had cathode bias, but few 60's, the reason generally being the greater available voltage swing across the valves with fixed bias. The power lost in the cathode bias resistor has to come through the power transformer and starts to become fairly significant at higher powers.

Following Hi-Fi crazyness there actually are “re-creation” guitar amps out there now which really do have single-ended class-A output stages that double as a room heater. But they re-create something that didn't exist. I don't think you will find a single example of genuine class-A output from the actual valve guitar amp era in Australia.

From a guitarist's perspective the main drawback with genuine class-A output is a huge weight (and cost) penalty per watt. An important difference between push-pull and single-ended output stages is that the idle anode current is balanced in the push-pull but not in the single-ended output transformer.

In the single-ended design the idle current leads to a standing magnetic field in the transformer core, which uses up part of the headroom to core magnetic saturation (and distortion). So the core has to be considerably bigger, and a lot heavier, for a given power level than in a push-pull stage. Valve amps already have a weight disadvantage compared to solid-state, but class-A output only makes that much worse.

As a guide a 100 watt push-pull tranny has an outline roughly 6-inches (150mm) on a side. In a single-ended stage a tranny this volume would be lucky to be rated at 10 watts. 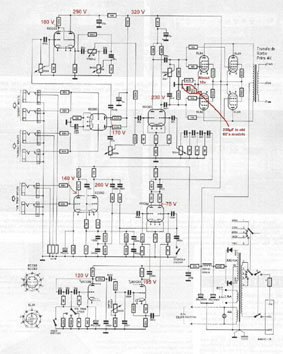