Many of the classic era amplifiers such as the Goldentone, Playmaster, and Maton, used a pair of 6DQ6's in the output stage.

These are not actually designed as audio valves but rather to superceed the 6CM5 in 23-inch Black and White TV line output stages (which explains the really berzerk several kilovolt peak rating of the anode.)

Amp builders loved 'em because they could make the magically fashionable 60 watts, as a beam pentode (having beam-forming plates rather than a conventional wire screen grid like the 6CA7) they were very physically robust on the road gigging, and best of all they were cheap and available in every suburban and town TV repair shop; handy if you happen to bust one gigging out the back of Lower Bandiwallop.

Then came colour TV's with their solid-state triplers, and they stopped making 6DQ6's.

One sort-of answer is to fit 6CM5's, the earlier line output valve. These were also made by the ton and like the 6DQ6 there are still a lot of originals hanging around as New Old Stock or NOS, meaning manufactured back in the day, but never been put into service.

But the central problem with having to buy NOS for guitar amp output valves is that they aren't making any more of them, and guitar amps tend to use output valves like a car uses tyres.

Due to a twist of history there are a several types of audio power valves that are still being manufactured and are available brand new, in particular the 6CA7/EL34, and the 6L6GT.

So the question keeps arising, can a 6DQ6 amp be converted to take a currently manufactured valve, if so which one, and how?

The major difficulty in giving a straight answer to these questions is that the 6DQ6 was never intended for audio application, so none of the databooks give typical operating conditions, as they do for say 6L6's, to compare.

So I have assembled a table of the actual operating conditions of the two amps most in question, the Goldie and the Playmaster (but will also apply to the Maton's, &c) alongside the databook typical conditions for the 6CA7, 6L6, and the 6146.

* Note; (except 6146) the amp powers are taken at a higher distortion level than the datasheet powers, say 10% THD against 2%, so they are all effectively equal.

New: 11/12/10. It now looks like the 6146 is the best option for a 6DQ6B substitute. It is likely that the 6146 will return similar figures under similar conditions to a 6DQ6B, but with an enhanced life from being under-run.

From this table it would seem that 6CA7's are a suitable substitute, provided we take care of;

Note that a pair of 6CA7's will draw over half an amp more heater current than 6DQ6's, and it have to be determined in each case if the heater supply will cope.

No serious traps here. What is a “Screen or No Connection” on pin 1 will need to be grounded for a 6CA7, and can best be tied to the cathode on pin 8 next door.

Naturally the anode lead to the transformer will need to be brought below-chassis and wired to respective pins 3, and will no doubt have to be extended and suitably insulated with heatshrink or full-length sleeving.

In the screen circuit on pins 4 there will be a 47 ohm connected to each from the existing screen supply. Instead, both screens must be fed from a single 470 ohm resistor direct to the main HT (output transformer center-tap).

So use a 5 watt wirewound, and expect it to get warm under drive.

“The 6DQ6A is a power valve used primarily as a power amplifier for horizontal deflection in television receivers. Because of volume of production, it is comparatively inexpensive.

As an output valve, the plate characteristics are not greatly different from those of the more familiar audio types such as the EL34 and the 6CA7.”
Playmaster 116 - Anthony Leo, June 1967 Electronics Australia

I guess that depends on what you understand by “greatly”. Here the anode characteristics of the 6DQ6 (solid) and the 6CA7 (dotted) are superimposed; 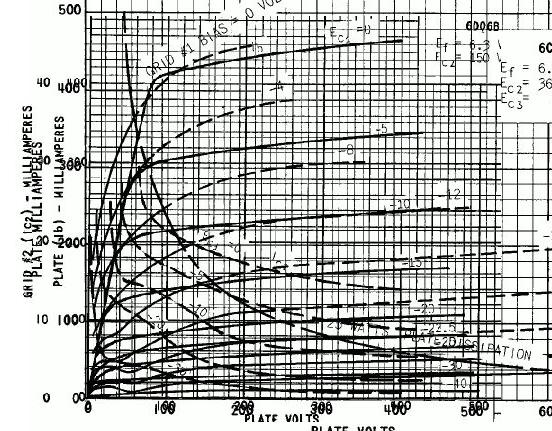 Generally speaking the 6CA7 curves are smoother and less kinky than those for the 6DQ6. This suggests that 6CA7 should be cleaner and have lower distortion than the 6DQ6.

What about the load?

In this case it's pretty darn close, but the main difference exact matching makes is screwing the last available watt out of a pair of valves.

And it turns out that there is an argument that one of the sources of “good tone”, a certain type of distortion, is a bit of a mismatch in the output stage, in particular below the optimum value.

But one important point: if you do modify any amplifier to take a valve other than the original, make sure this is clearly marked next to the sockets where it can't be missed, like “MODIFIED - 6CA7/EL34 ONLY!”

I have a playmaster that i built in the 60,s; then rebuilt in the late 80,s.It runs the original valves 6DQ6A,s; but 6DQ6B,s [that were used in televisions] run fine in it; I have been perusing some technical data and it appears 6GW6's could be used as a direct replacement. I have no idea on availability.

Alternately KT66's or KT77's [the latter more likely] or 6L6's could be used as a replacement. It would mean rewiring your CAP WIRES to PIN-3 of the sockets. No other mods needed. I have yet to try this.

Thanks for pointing out the 6GW6 Warwick. It actually has an identical plate characteristic (some databooks use the same graph with two titles) so for our needs we could think of it as a 6DQ6 with the anode coming out the base. How available these still are is another question entirely. -rr

Hi Roly,
Yes the Mad Maxiverb builder is at it again.:)

I see your request for people with old "converted" Goldentones to tune in.

I don't know whether My experiments qualify but my Amp did start life thanks to two Original irons [both A&R]. I was told that they came from a Goldentone 60 watt Basshead, that's all I know but I have a hunch it's just a playmaster

[these are certainly from a PM117, not a Goldie, and nothing wrong with that -rr]

Correct me if I'm wrong but one of the main Questions would likely be the PP impedance mismatch for 6L6's or EL34's.

Here's my build story, I decided to use the Gtone Pwr Tranny giving 420VDC with a pair of JJ 6V6's and after talks with John at BJ Amps in Brisbane he recommended that the 2k6 OT was too low and kindly made a 6k6 OT [for a good price].

To cut to the point, I was not satisfied and I racked my brain over the issue of using The 2k6 OT with a pair of 6V6's. After many temp circuits, much searching, questions and reading I Emailed Kevin O'Conner at London Power [AKA, King TUT].

He politely informed me that the PP imp is not the big issue that some make it to be, well not for guitar amps.

[TUT's reply] "Any OT can be used with any Output Tubes just don't exceed the max plate dissipation and of course the wattage of the tranny".

It makes perfect sense as you can pull 2 tubes from a 100 watt Marshall and it has no issues other than driving into a lower PP imp "reaps more Harmonic Distortion". Early Messa Amps had a 60/100 footswitch effecting the same thing.

Now back to my rather frustrating 6V6 build which had sat on my bench now for many months and had descended into a blob of steel, glass and spaghetti from all the temp mods.

The up shot of it all, by swapping the 6k6 OT with the Gtone 2k6 OT and leaving everything else as is. A quick check of the bias and Bingo!

WOW! What an improvement! The bottomend was now fuller/Fatter, the icepick treble problem had vastly improved.

I have since found an article at [Obsolete Electronics] from way back in the 50's which explains this interesting little quirk of low windings and how this accentuates the lower harmonic's AKA the Marshall tone.

It has become "Plainly Clear" with my limited skills and experience that One of the main reasons why a Marshall Amp had such a distinctive huge fat sound would be due to the use of rather Low PP imp Output Transformers, I think some as low as 1k7. [And a quad box helps]

The Low wind OT's would likely have a bigger impact on the sonics of early Marshalls than just the type of output tubes used.

I don't have the money to purchase a whole set of differing output tubes and trannies to pursue this, nor do I have the equipment to do any valid researching, other folks may wish to look at this indepth.

In all I learnt a hell of a lot about Tube Amps in the course of this long and painful expedition into old iron.

Meantime I'm having lots of fun with a pair of 6GW8's well I had to do something with the 6k6 OT, but that's a whole other story.

These are just my observations of what happens when you just can't let go of a crazy idea and sometimes it does pay to question even the experts.

So if it's worth anything, I say Go for it and you will likely be rewarded with a Goldentone.:)

I think the answer to Phil's observation about below-optimum loading can be found by studying the anode curves. With a low load the load-line becomes much steeper on the graph, generally running into a fairly non-linear portion of the valve characteristic. We notice that when applying 6CA7's the Hi-Fi crowd tend to go the opposite way, high-ish value loads, to flatten the load-line and get reduced distortion, but at the expense of raw watts. -rr