A tweek for tremolo speaker pumping.

Some rigs suffer from speaker cone “pumping” in sympathy with the tremolo LFO frequency.

All the direct-modulation systems suffer from this to some degree or other, and only the opto-coupled LDR seems free of it.

The problem is that the low frequency signal from the oscillator finds its way into the signal path and is amplified just like any bass signal.

The result is that for deep tremolo depths and slow speeds the cones can “pump” or motor violently forward and back.

This isn't good for the speakers or your sound for several reasons we won't dwell on.

Here is a fragment of an early Maton Series 10 tremolo mixer prone to producing pumping. Maton didn't have this on their own, and many of the arrangements used prior to LDR opto's had this problem, including the Fender DeLuxe so it's no great shame.

In this case the tremolo is applied to the cathode of V2a. Because this wobbles the DC conditions of the first preamp stage it turns up on the anode and is coupled to the next stage via the 0.01uF and 100k grid leak on V2b.

This is what the original 0.01uF/100k coupling looks like;

The corner frequency is;

You can confirm this graphically by continuing the two straight sections until they intersect, “squaring the knee”. Where they meet should be at 159Hz. Save the graphic and try it.

So at the bottom open-E at ~80Hz this is already producing a loss of -8dB, less than half.

Against this it is cutting down the tremolo oscillator to 1/8th or -24dB. But this starts out as a very large signal compared to our guitar signal.

This amp has what can only be called a very odd network following the tremolo modulation stage. The obvious intent is to filter the LFO out of the signal, but given the electronic engineering standard of Moody amps I have to wonder if this was original or later modding. 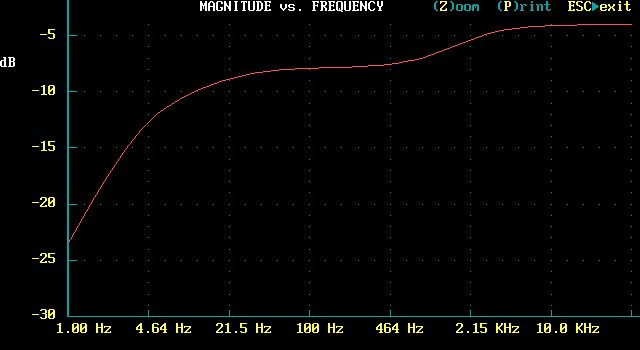 Can we do better than this?

The tremolo oscillator ranges up to about 10Hz, while the low-E on a tenor guitar is about 80Hz. So we can change the coupling between V2a and V2b into a high-pass network that passes our guitar signal while tending to block the tremolo frequency.

You can find variants of this in various designs such as the Vox AC30, some Goldies, Playmasters, and so on.

This is a simple 4-pole lead network.

This replaces the anode to grid coupling circuit.

This is the response and insertion loss.

Now we have an insertion loss reduced to less than -2dB by bumping the grid resistance right up.

We have maintained the original loss of around -8dB on the low-E so as not to change the playing sound too much.

This is the model used in ECAP to produce the graph above. 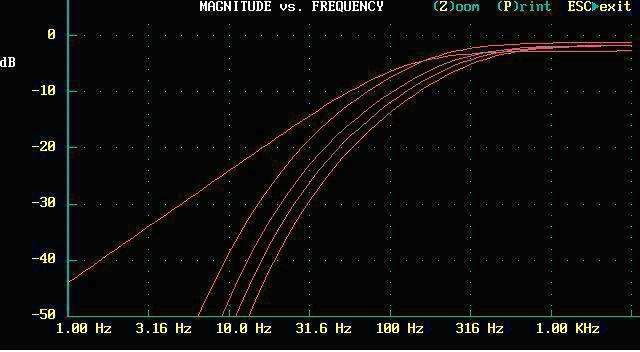 Have just fitted the LFO filter to the Maton amp, it has taken this long to get the caps required for this mod. I ended up with 2000 VDC units and they were physically difficult to fit in such a confined area, managed to squeeze them in though and almost all of the speaker pumping effect is gone. What is left is probably just background noise now. Thanks yet again for your help. I have just had a Goldentone suitcase amp arrive with the same problem, so I will try the same cct in that one as well albeit with some smaller caps.

[note: the caps only need a normal voltage rating of around the HT voltage]

Thanks also to Ric for the original question that inspired this article.