Yes, “Mr Mielnik” was a charming foreign gentleman who had a shop in Charing Cross, Sydney. I have a very vivid memory of his baldish pate and his smile and his accent, a quietly spoken man, a touch of perspiration.

For my 13th, my parents took my Dad's (acoustic) Hofner in to him, and he fitted a pickup and “knobs” to it...from distant memory, it had gold foil, so mebbe a Harmony or maybe DeArmond? In those days, who knew? White knob, gold centre?

Anyway, the deal included one of his amps, and again from very distant memory, it was white tolex, probably an 8” or 10”? small combo, guessing 5 - 10w? and I think gold grille cloth and those white knobs with gold centres. Neat.

Absolutely no memory of how it sounded, but at that time, it was a “real” amp. Might even have been a 6BQ5 or 6AQ5...

Before that, I used to plug things into our mono radiogram. Custom made, sorta triangular .. or even fish shaped, with a chrome leg to hold up the “tail”. That was equipped with a 12.” Stick a mic in, instant PA.

Of course, later on we all moved over to Fenders.

google (The Golf House grew out of a pawn shop run by Russian immigrant, Harry Landis who arrived in Sydney via Broken Hill in 1917. In 1918, Landis purchased the Railway Loan Office at 226 Elizabeth Street, Surry Hills where he opened a pawnshop. In 1923 he moved the pawnshop into 220-222 Elizabeth Street, where two of Harry's sons entered the business, Harry Jr. and Jack. The pawn shop became divided into two main sections, musical instruments, run by Harry Jr. and sporting goods, particularly golf equipment run by Jack. After WWII military service, Jack Landis established the Golf House. Harry Landis Sr. died in 1953 and the shop was divided between the two sons.)

Saw my first Camco kit in the late 70's in Harry Landis Music in Sydney. They must have just gone out of business around then. I can remember I was fascinated by the round lugs (which reminded me of Hayman drums) and the fact that all the stands and tom mounts looked like they would break in about five seconds (this was the late 70s (and I presume this had something to do with the company's demise).

Rather like the Woolworths of musical gear, it wasn't anything like a collectibles trade store, just bread and butter gear at the time.

I'm sure I bought at least one on time payment (a la the lovely bits of paper sometimes seen in Beatles' history).

Harry's son (?) always thought of us whipper snappers as fun, but at the end of the day, he did fair deals.

When your bass player needed a guitar, you'd lob in and buy a Precision, what else?

I may have a snap somewhere of the band with the Hofner .. dunno if the amp is visible....must find photo....

If anyone turns up a “Belto” amp (or finds a mangled Fender with the inscription “belto” somewhere inside I am to blame.

Way before “Boogie” I occasionally took a friend's Fender (like a vibroverb) and turned into at least a 60 or 100w. Custom wound trannys, one 12” all shoehorned into the original box and chassis.

Smithys have one hiding upstairs that I'd like to buy for old time's sake.

Old Mad magazine had a cartoon of Dylan, legs barrelled out, geetar and harp in tow, and between the bowed legs was a crappy, ripped up relic of an amp with the logo “Belto” on it.

So anything passing thru my “workshop” was a Belto, or at least a Belto Customod.

Today, I have a couple of badged “Belto's”.

Did the same brand on speaker boxes.

Have a pic somewhere of a later band with 2 x single 15” JBLs in separate boxes.

Not sure if I mentioned it, but “Clive Shakespeare” used to work at “Phoenix”, so track him down (ex Sherbet) and grill him about Phoenix amps. Used by some of the better progressive bands...heck, maybe Sherbet (call Garth Porter!) 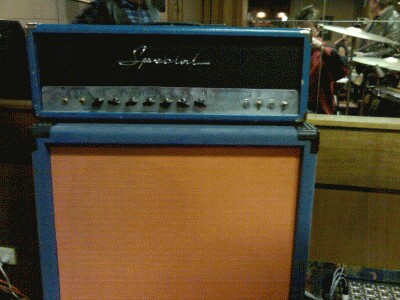 Spotted at a jam session in Bendigo. “His name is Don Webb and apparently he designed the amps to overdrive in the preamp section and the power amp section so you can have a host of interesting overdrive characteristics.
i had a play through one, very warm and rounded sounding in my opinion, but i didnt fully krank it
he told me they use the 6550? output power tubes (the ones that are similar looking to kt88's)”

this amp i built about 6 - 7 years ago, its actually running 5881's with a set of trannys out of a blue face eminar, by all theory's i shoundn't be running the 750v plates on 5881's but it hasn't blown up yet and still sounds good on it's first set of valves. 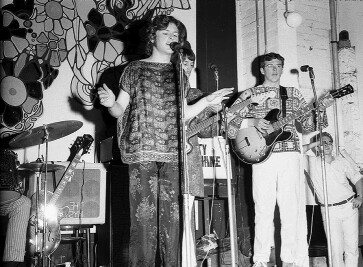 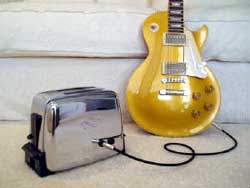 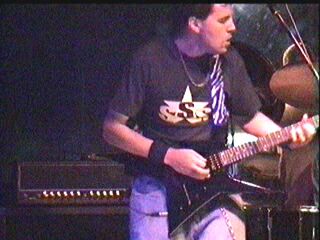 Steve Herenyi and his cranked Maxim at the Prince of Wales Hotel.

Please see how to submit.